Our Story
When we started farming we didn't know that livestock guardian dogs even existed. We started with goats and chickens. Added more goats and chickens. Then also added pigs. Somewhere in the middle of all of that we lost chickens to predators and began to worry about the other animals, and, as we continued to expand, we realized that the wild animals of northern Michigan, the ones that evolved and adapted to live here long before we moved in, were not going anywhere anytime soon. After weighing out all of the options that we had to keep our animals safe, we stumbled upon some readings of livestock guardian dogs. At that time, the losses were frustrating and filled with tears, but that's also when things started to get more clear: we needed animal that would look after our farm, our flocks, and, in general, our fortune. It would have to be calm, caring, assertive, and relentless in the duty to protect. The story could have ended there, but it didn't. It's been the best farm decision we've ever made to invest in a livestock guardian dog. Here it is from the beginning:

Those are things that we don't forget. We invest all of our time, money, and care into our animals. Even a chicken, as small as it is, remains a valuable part of our farm. One loss is one too many.

***
​
So when we began thinking about adding a livestock guardian dog as a possible solution, our conversations went something like this:

Me: "We are losing chickens, and fencing them in a run to keep them safe is not how we envisioned this. So if we get a livestock guardian dog, it will automatically solve our problem, and they can keep free-ranging, right?"

Me: "I wonder how it knows to protect other animals."

Wife: "It must have some type of instinct or something."

Me: "Okay, if we get one, we probably just throw it in with our animals. It seems as though these dogs just will know what to do. I don't want it to bond with us too much because then it may get confused. This won't be a family pet."

Wife: "Yeah, it will just sleep in the barn at night. We can keep it with the goats in their fenced in pen during the day and put up one of those open LGD triangles that it can jump through that I saw on some website. It will jump through it when our chickens need its help."

Me: "I've heard of other farms having great pyrenes. Let's see if we can get one of those. How much do these dogs cost?"

Wife: "I don't know, but I'm sure we can get one for a couple hundred dollars."

Me: "hmmm . . . but how could a dog protect a chicken from aerial predators? It can't climb a tree!"

Yes, we were clueless. But . . . we were also a little frustrated and very desperate.

Luckily, we are not only hardworking, resilient farmers, but we can also read. So before we made any rash decisions on buying a great pyrenes, we did our research. Lo and behold, we came to realize there were actually quite a few different livestock guardian dog breeds. Each breed, we found, came with it's own set of unique physical features and personality strengths. A maremma is generally a smaller-framed LDG, which may or may not be easier on the pocketbook for feed costs. An anatolian shepherd is generally bigger than a maremma. They have the tendency to be good at border patrol because they like to roam. Sarplaninacs (known by all as "shars"), we would learn, have a massive, mollosser-type body structure and tend to weigh, on average, a lot more than a maremma or anatolian shepherd and have brute strength to match. Shars have personality strengths of being a centralized dog among their flock, which could be complementary to an anatolian shepherd.

Further information led us to understand them even better.

LGDs, we realized, are working dogs. They must have a purpose. Under a shepherd's careful watch, these dogs need to be bonded to the animals they protect. By gaining trust, they are accepted into the flock. If they come from strong working lines of dogs, they have the tendency to exhibit the traits that one would look for in a guardian. They are strong, yet calm. Caring, yet independent. Intelligent, yet obedient. Hard working, yet playful. In fact, these unique traits also transfer over to human companionship as well. Once bonded with its shepherd, there is a lifetime of companionship to be had. And once we bought our first livestock guardian dog, we soon learned that these dogs never forget.

After much reflection, we decided to invest in our first LGD, a maremma x anatolian shepherd mix (50/50). She came to us towards the end of 2020 on a plane flight from Florida. Over the course of the next three months, this puppy, whom we named Lenna, bonded with us and our newborn daughter. Slowly over the course of the next few months, she began to realize that we really cared about the animals at our farm. And then, as soon as the winter snow melted in the spring of 2021, her instincts took over, as she became committed to keeping our animals safe and officially became a part of the flock! She can be seen on any given day, chickens in tow, preening right next to her, as she watches her surroundings.

As time passed, we loved Lenna so much, we invested in farm guardianship even more. Broo Jr., a sarplaninac shepherd and stud son of "Broo", a highly touted shar, came to us in the spring of 2021. Never unimpressive, he quickly became a member of our family. A quick learner, and extremely smart, he took on the role of guardianship around 6 months of age.

And that question that I thought we knew the answer to at the beginning of all of this:

Me: "hmmm . . . but how could a dog protect a chicken from aerial predators? It can't climb a tree!"
​
That answer is a yes! Lenna and Broo will spot, chase, and bark off aerial predators, no longer making it an easy meal for eagles, hawks, osprey, and owls.

With their combination of perimeter and centralized protection, we go to sleep at night and leave our farm with a peace of mind knowing that they are working to keep everyone safe.  And they do it because they are our companions on this farm.

LGD's have several attributes that make them excellent farm and family guardians: 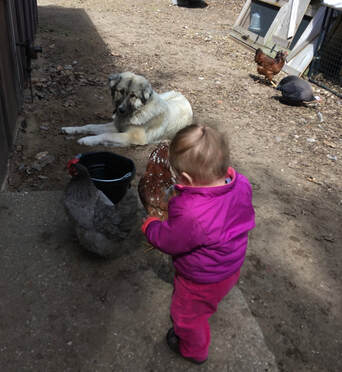 Calm and watchful of birds and baby.

Livestock guardian dogs, also called LGD's, are specific breeds that have been developed under pastoral conditions. They are gentle with the animals they are bonded to, including chickens and newborn kids, but fiercely assertive at keeping predators at bay.

These majestic dogs historically protected their flocks, and the humans who oversaw them, throughout the mountains and pastures of Europe and Asia. Today, livestock guardian dogs are found around the world. Many have been brought to America to protect large flocks, small herds, and even single households.

Our dogs bark at hawks, bald eagles, and owls to protect our chickens and newborn kids from a myriad of aerial predators. We have seen them chase away fox, coyote, and neighborhood dogs and cats, yet they are gentle with our own cats - Broo even licks them! This discernment of friend vs. foe is an amazing and important quality of any working LGD.